Hey! This is Katriina Talaslahti!

I’m a Finnish professional football goalkeeper playing for FC Fleury 91 Femininé, France, season 2021-2022. It was my honor to make a contract with FC Fleury starting from August 2021.

Read more about my highlights and news on the Career section and by clicking the links below:

During my first season 2019-2020 in Lyon, our OL Women’s team reached all the set goals, like the French league championship and the French Cup. The highlight was to win the Champions League final tournament on 30th August 2020, in Bilbao, Northern Spain. I also fulfilled my main goal; to win the UEFA Women’s Champions League under the age of 20. I am now the only Finnish female player who has won the title. As a whole, the first season really gave me lots of great experiences. Therefore, I am now working hard to finish the season 2021-2022 with enthusiasm, energy and high expectations. 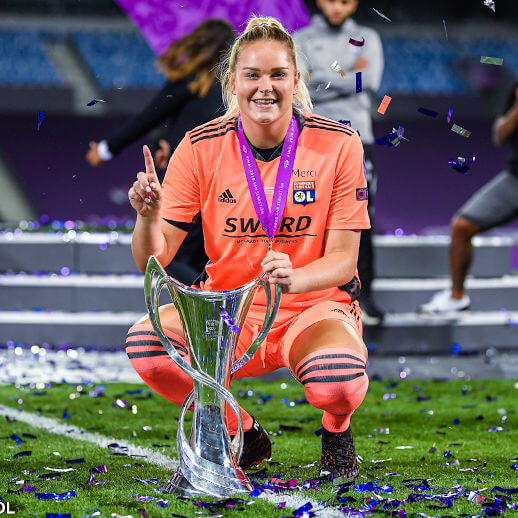 The Coupe de France’s best of 16 round draw sent FC Fleury 91 to a trip to the French Riviera to play against second league team OGC Nice.

“It was very warm on Sunday, something like 17 degrees and the sun was shining. That was cool, as you don’t get much sunshine in Paris now. It was nice to go somewhere, where everything is green, there are palm trees and it’s by the sea. We did a lot of walks, as it’s so different to Paris”, Katriina Talaslahti said. 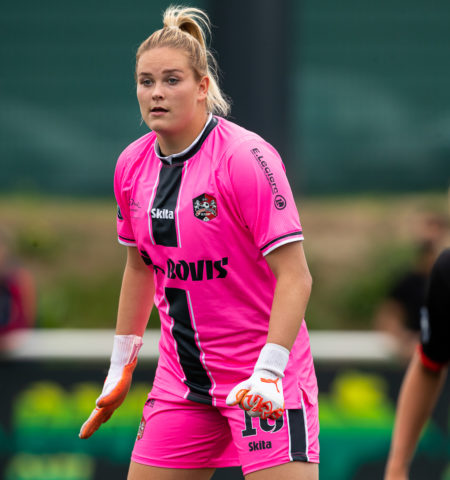 Hey! This is Katriina Talaslahti,

It’s my honor to announce my new contract with the FC Fleury 91 Femininé from August 2021 on wards. I’m very happy to stay in France and play the D1 Arkema League for the season 2021-2022.

My story will be updated here soon… 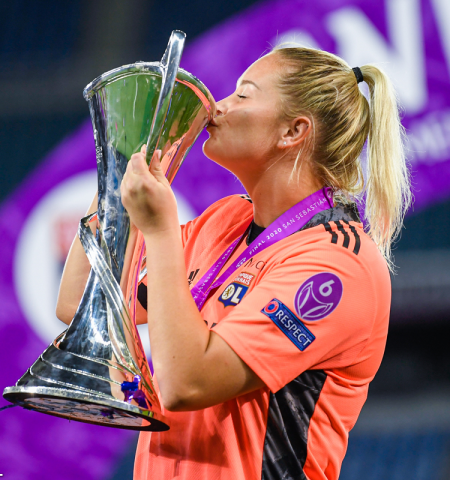 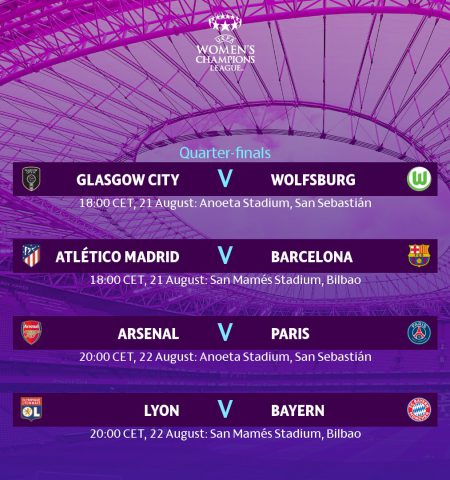 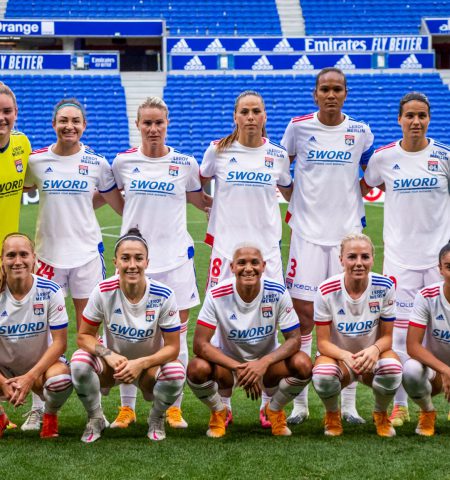 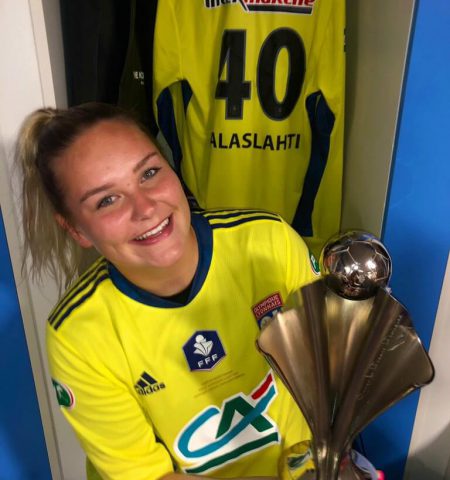 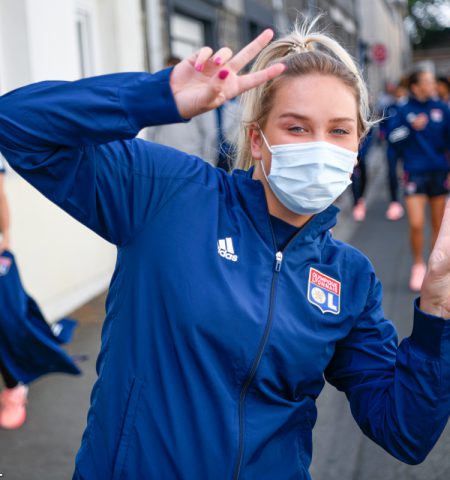 Olympique Lyonnais had achieved a place in the French Cup final during 2019. In the final, in September 2019, we played against our beloved enemy PSG from Paris. OLF managed to win the French Cup championship. 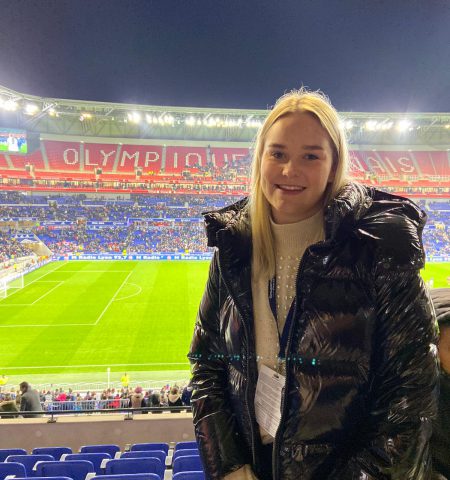 Women’s French League D1 Arkema began in August 2019. At the same time, this was my first league season in the new club Olympique Lyonnais Feminine (OLF). 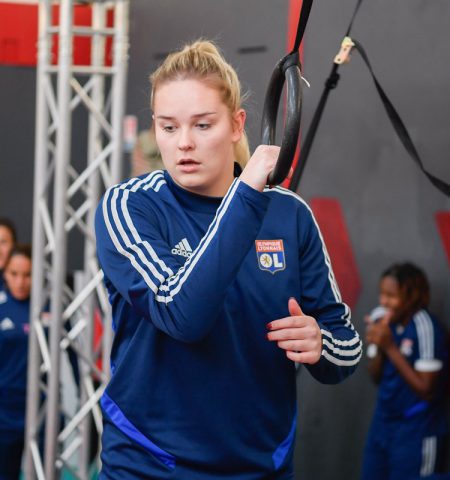 The season 2019-2020 started with a preparation period. We spent this time period in the US by participating in the 2019 International Champions Cup Women’s Tournament in North Carolina by winning two matches and achieving the tournament trophy. 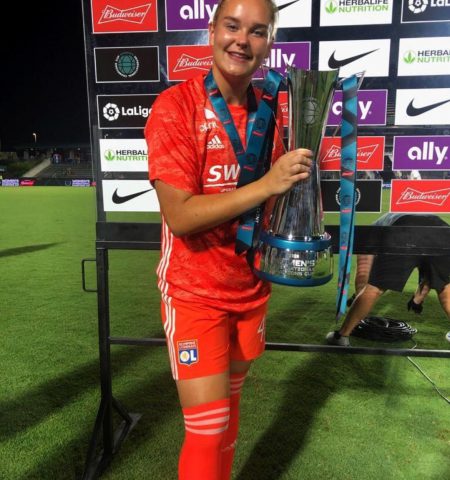 After summer vacation I changed my location from Munich, Germany to Lyon, France. I signed new three years contract with Olympique Lyonnais starting from 1st July, 2019.

In the picture: I visited Lyon in May. I am at the Groupama Stadium, where OL team plays the Champion League and French league matches.

News about my transfer to OL: 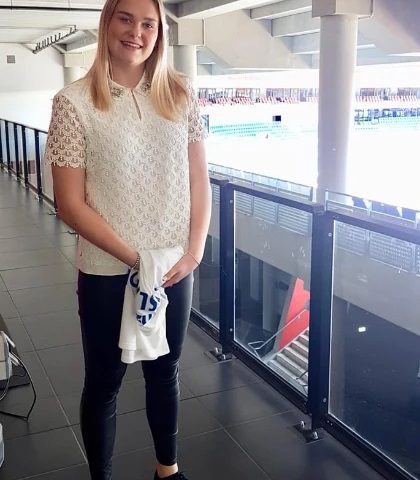 Already during the fall season, I was the first goalkeeper in FC Bayern’s 2. team. Overall, my team’s season has gone really well – we won the 2. Bundesliga championship in May! In June I’ll be off to a well-deserved summer vacation in Finland!

In April I attended the UEFA Women’s Under-19 Championship Qualification tournament in Belgium with the Finnish WU19 National Team. Unfortunately, in the last minute, we dropped out of the UEFA WU19 final tournament. Representing Finland at the junior level is now over.

More statistics about my season you can find here. 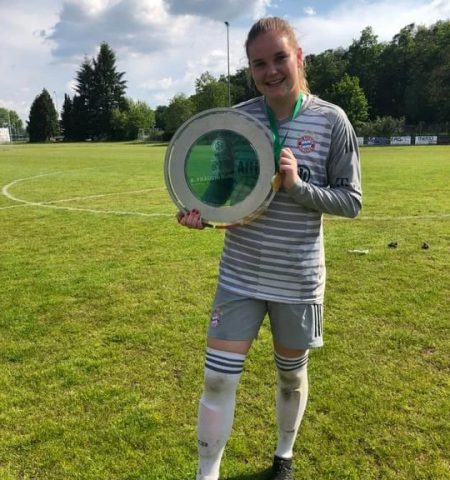 In November I got invited for the first time to the WU19 Finnish national team training camp. 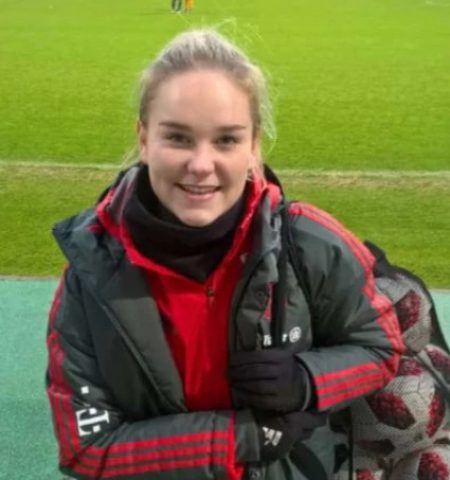 The season 2016-2017 we had a wonderful U17 team in FC Bayern. Already during the previous season we learned to know each other very well.
And when we got some good new players, our playing was at an excellent level.
So, we first won the U17 southern group and finally the U17 German Championship in June!

These team mates are still my dear friends.

Follow up my highlights of this season in Finnish in this article from YLE, Keskisuomalainen or Suomifutis. 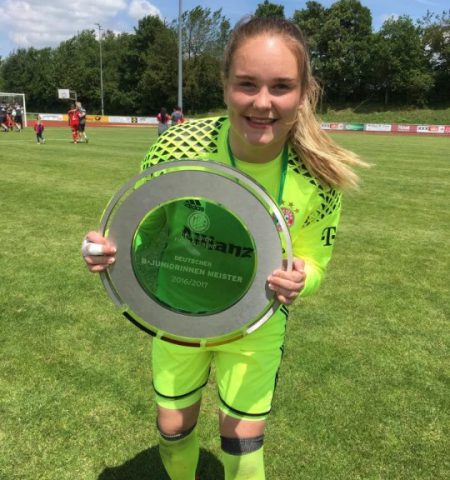 This season 2015-2016 I played for FC Bayern WU17 1st team in WU17 Bundesliga. In the end of season we attended Scania Women’s Cup U19 in Le Mans in France and I played in final against FC Barcelona.

This summer I also made time to promote my native Finland by participating in a book highlighting the Finnish sauna culture by Carita Harju ‘Sauna from Finland’. Filming was done in the middle of the wonderful Finnish summer.

We also had the honor to visit the Finnish Embassy in Berlin end of the year. 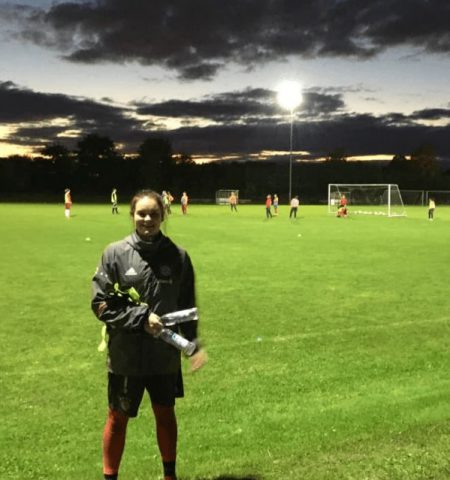 In 2015, me and my sister Pauliina were both scouted to join FC Bayern Munich. We moved to Munich in fall 2015 and my whole family decided to setup home so far in Germany.

My story (in Finnish) from MTV3. 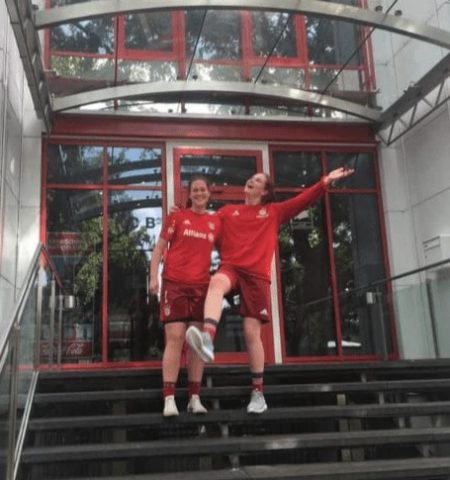 After playing for FC Honka and Leppävaaran Pallo in Finland, I played the season 2014-2015 in 1. FC Nürnberg in Germany with my sister Pauliina Talaslahti.

In fall 2014 me and my sister both started at a local sports school in Nürnberg and settled down very well. 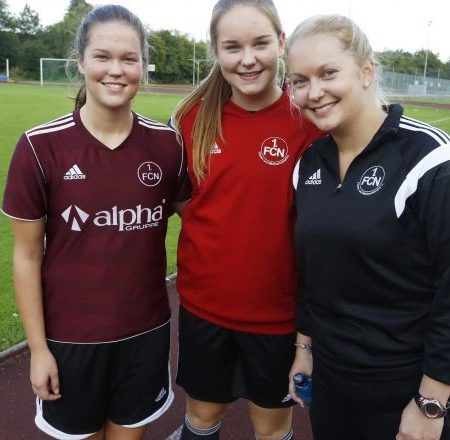 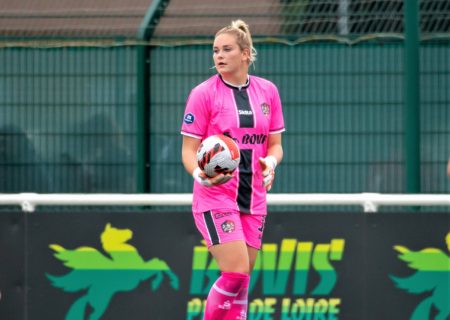 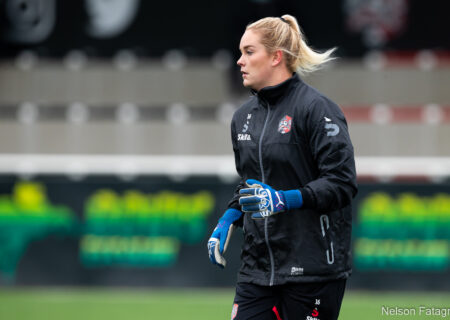 "You often hear to say that football is men's sport, but that’s no longer the case today" – The youngest player of the Finnish women’s national team Katriina Talaslahti says 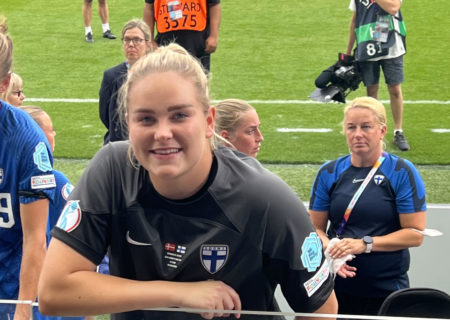 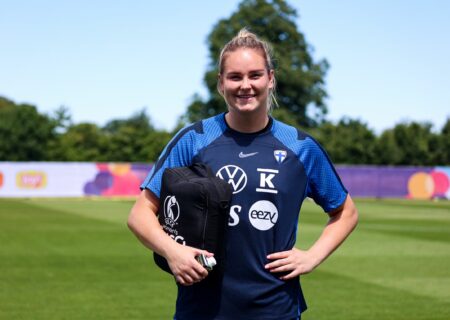 ‘If my chance comes, I’ll be ready’ – Finland keeper Talaslahti ready and waiting for opportunity 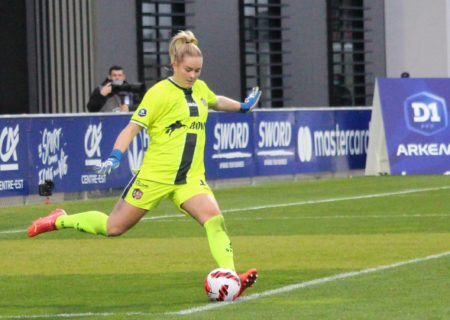 Talaslahti Looks Ahead To Denmark Clash 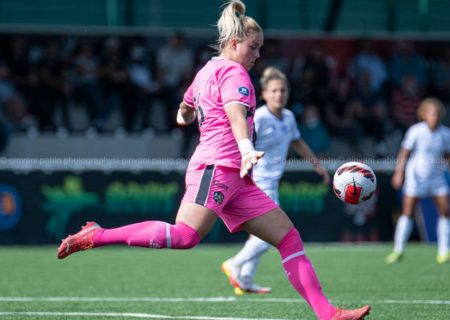 She has already represented the world's top clubs in Europe - the next goal is even tougher: "Let's see when it will happen", says Fleury's goalkeeper Talaslahti

Another day another game 😉✅

The feeling after getting back on the football pit

Some Moments At Home✨🫶🏼❄️ #december

Training through the last week before christmas br

Another day another game😉

Thank you for your interest in Katriina’s professional football career and her brand. Let’s talk about collaboration and how Katriina’s Business Team can consult and help your business via her brand.

Please use the form below to submit a question or a business contact enquiry. You can also use info@katriinatalaslahti.com for business enquiries. Please note that due to the volume of fan submissions there might be delays in responses.