Happy about the road so far 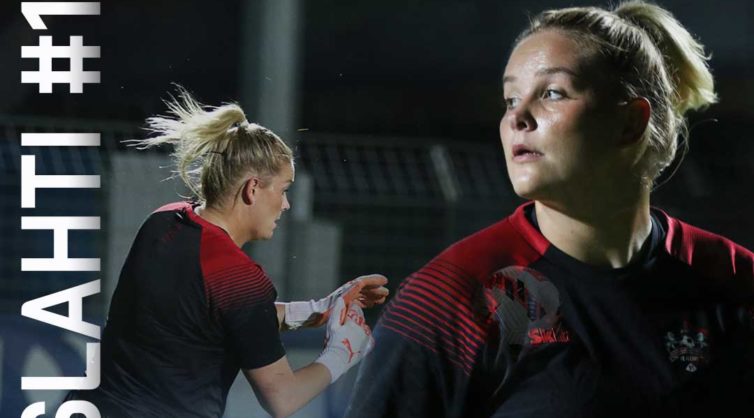 Like our games with FC Fleury 91. A chance to play against very good teams from the French first league, the D1Arkema, straight from the top of European football. Like PSG in our Coupe de France semifinal. And Lyon later this month.

I’ve been happy at Fleury, so I was happy to sign a new contract with the club for next season. And the very same day I got called up to the Finnish national team for the forthcoming World Cup qualification games. Cool stuff indeed.

I’ve had a good feeling ever since I arrived in Fleury last summer. That maybe it’s the kind of team where I would get a chance to play.

I didn’t play in the first two games of the season, but in the third game I did play. In a good league. Against a good team (Bordeaux). It wasn’t the best of games, but after it I did kind of feel that I belong to the pitch and that I want to show what I can do.

When I moved from Lyon to Fleury, I felt ready. I felt that it’s the time for me to play now. As a number one goalkeeper. Now it feels that I’ve grown a lot as a goalkeeper. Fleury has been a great team for that.

When playing for Fleury, I’m not just standing there, nor am I expected to rescue the team on my own. We’ve got many girls who can play. There are games in which I have to do a lot, but also games in which there are less balls to save.

I feel good in this team and I think I’ve developed a lot since the beginning of the season. You learn a lot by playing and there’s been a lot to take on board for next season too.

But it’s not just about this season. The road has been longer than that. I was just 13 when I started playing abroad. In Germany. And I’m happy to have left so early. I think experiencing those big clubs, FC Bayern München and Olympique Lyonnais, has been a really good basis for my development.

They’ve both got great facilities and they’ve always had full-time goalkeeping coaches. And at Bayern and especially Lyon you play against the very best in the world every day in training. Those training sessions have helped me to get here.

Those kinds of clubs also boost your confidence as you’re among the best and they had wanted me to go there to develop. It’s a nice feeling. I left those clubs with invaluable experiences and having made a lot of friends.

I don’t think I would necessarily be in this point in my career, if I hadn’t gone there at that age. I have to be happy with everything that has already happened so far, but I also feel I could one day return there. It’s one of my goals to play in Germany as a number one goalkeeper.

Maybe in a few years or so. Through playing I’m now developing a lot and I also get to show other clubs what I can do.

It’s great that I got selected for the national team of Finland. This is the second time, but the first time with official games. We’re playing World Cup qualification games against Slovakia on Friday 8th and against Georgia on Tuesday 12th of April.

It’s nice to play with other Finnish players. I’ve played with the youth national teams earlier in my career, but now I get to play with the women’s team.

I don’t know a lot of the girls. I haven’t played with them before. In my first national team camp I got to know them a little bit better, see how they play and how they’ve developed in their clubs.

Now I get to show what I have done in my career up to this point.

I’ll be doing everything I can. The EURO2022 final tournament is in England in the summer and it would be great to get selected for that. If they do pick me, they have seen something in me.