Original article by SuomiFutis.com 20.6.2022 BY the Sport journalist Heikki Kuparinen 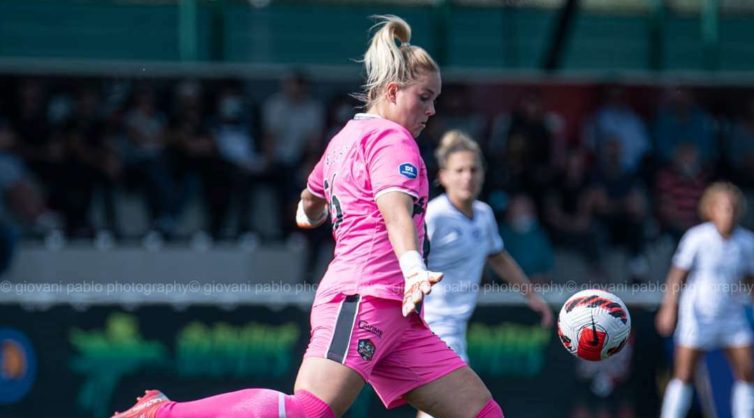 The 21-year-old UEFA Euro player of the Finnish team “Helmarit” has won football’s most coveted award and already represented the world’s top clubs. The next goal is even tougher: “Let’s see when it will happen”, says Katriina Talaslahti – the goalkeeper for FC Fleury 91.

Finland women’s national football team is also known by the nickname “The Boreal Owls” – shortly in Finnish “Helmarit”. Helmarit’s squad has remained very uniform and almost unchanged in recent years. However, one newcomer in the A national team during the spring was Katriina Talaslahti the young goalkeeper, who after making her debut in April, was finally included in the Finnish European Championship squad as well.

The 21-year-old Talaslahti is currently the youngest player the Finnish national team and the only player born in the 21st century. The SuomiFutis.com interviewed Talaslahti shortly after the European Championship selections. The goalkeeper’s season in France at FC Fleury 91 had ended a week and a half earlier. During the interview week, she maintained her fitness by training once a day with other players who had already finished their season before the rest of the Helmarit squad joined the preparation camp for the European Championships on Monday 20.6.

Talaslahti’s feelings were naturally high after the European Championships squad selection. The players found out about their selection two days before the Helmarit press conference by email.

Talaslahti admitted that she had been waiting for an invitation to the national team for quite a long time. As a young goalkeeper, she spent several years in the top European organizations of FC Bayern Munich and Olympique Lyon, but her invitation to the Helmarit came not until this season, when matches and playing minutes began to come regularly in the FC Fleury 91 team.

A year in Germany turned into a permanent move abroad

Katriina Talaslahti’s career path is very rare for a Finnish soccer player, and especially unique for a Finnish female soccer player. She moved abroad from Finland when she was only 13 years old. The family made the decision entirely in terms of football. A comparison that comes to mind from the men’s side is the Finnish national team player Marcus Forss who also moved to England at the age of 13 to build his career.

Talaslahti’s journey abroad began at the time when she was playing in FC Honka in 2014 and was asked to keep her shape during her summer vacation week by training with the 1. FC Nuremberg girls’ team. A few days later, the club asked her if she would like to stay in the club for the coming season, and on these days the goalkeeper is still on the international path.

Talaslahti spent a year in Nuremberg, in Germany. From there, the journey continued to the German giant FC Bayern Munich, and four years later, in the summer of 2019, to the world’s top team Lyon. Not even for a moment has Talaslahti regretted her decision to leave her home country when she was young.

FC Bayern Munich’s offer was a really big deal. Talaslahti got a professional contract at the age of 14 and started getting paid for playing. Although she initially played for Bayern’s under-17 team, she also trained every day with women’s first team.

In the summer of 2019, another important phone call followed, when Lyon was asked about Talaslahti’s willingness to transfer to their organization. Talaslahti says that perhaps the most important factor in moving to Lyon was the fact that Lyon’s women’s team had a full-time goalkeeping coach, while at Bayern the goalkeeper coach worked only four days a week at the time. Great determination and a huge desire to develop can be heard throughout Talaslahti’s voice. She often emphasizes how important high-quality coaching is to her.

The Talaslahti family moved with their daughter to Nuremberg when the adventure abroad began. Also, during the time in Munich, the family was strongly present during the shuttles between Finland and Munich, however, later Katriina moved to Lyon alone.

Talaslahti spent two seasons in Lyon’s top team. For the 2021-2022 season, she moved to another French league club, FC Fleury 91. FC Fleury was promoted to the first French league for the 2017-2018 season and finished the season with the best league position in its history after being fourth in the league. In addition, Fleury made it to the semi-finals of the French Cup. However, the tough trio Lyon, PSG, and Paris FC were better in the league, but Fleury took the scalp of the latter in the quarterfinals of the Coupe de France after extra time.

Talaslahti justifies her decision to transfer with the need for more playing time. The season with Fleury was excellent on a personal level as well, as Talaslahti played 14 league matches, and kept a clean sheet in seven of them. She conceded only 14 goals. Of all the league games played by Talaslahti, ten ended in Fleury’s victory and four in defeat.

Talaslahti is a full-time professional football player in France. She has also studied business administration and economics at the international university HELBUS Helsinki. Right now, though, studies are on hiatus, with the main focus being strictly on football. Acquiring language skills has been an important factor in my career path, as the language in both Lyon and Fleury is French. Talaslahti speaks both fluent German and French, and of course English.

“That victory will go down in my history”

Talaslahti spent a total of six years at a young age in top organizations in Europe, four years in FC Bayern Munich from 2015-2019 and two years in Olympique Lyon from 2019-2021. Bayern is also one of Germany’s giants on the women’s side, and in the 2018-2019 season, they reached the semifinals of the Women’s Champions League.

With their eight championships, Lyon is the most successful team in the Women’s Champions League. The same also applies to the French league, in which Lyon was crowned champion no less than 14 times in a row between 2007 and 2020. Also, Lyon is generally regarded as the best women’s team in the world, and is by many measures the pioneer club in women’s football.

Lyon won during Talaslahti’s first season 2019-2020 the treble including Ligue 1, the French Cup and the UEFA Champions League. In the Champions League final played in August 2020, Lyon defeated Wolfsburg 3-1. Talaslahti sat on the bench in the final together with the Spanish national team goalkeeper Lola Gallardo.

Both Gallardo and Talaslahti had to watch the Champions League matches from the bench during both of their seasons with Lyon, since Lyon’s first goalkeeper Sarah Bouhaddi played and had been chosen as the best goalkeeper in the world four times. Bouhaddi was also chosen as the best goalkeeper in the Women’s Champions League in the 2019-2020 season. This summer, both Talaslahti and Gallardo will participate in the European Championships, however Bouhaddi withdrew from the French national team in 2020 after disagreements with head coach Corinne Diacre.

Although she didn’t get much playing time in Lyon, Talaslahti is very satisfied that she was part of the very top team for two years.

In August 2020, Talaslahti became the first Finnish woman to win the Champions League. Among male players, only Jari Litmanen and Sami Hyypiä have been able to do the same. Talaslahti fondly remembers the star moment from almost two years ago, saying it has been one of the biggest highlights in her career so far.

Lyon has been and continues to team with the biggest world star players in women’s football. Talaslahti also got many good friends from her previous clubs. She keeps in touch with some of them every week, with others a little less often.

Talaslahti mentions the Spanish goalkeeper Lola Gallardo as a particularly good friend of hers. It is also great to face her in Helmarit’s European Championship opener against Spain. Currently, Gallardo represents Atlético Madrid.

Other familiar faces at the European Championships include Damaris Egurrola (she is still in Lyon), who recently switched from the Spanish national team to the Dutch national team. As good friends, Talaslahti also lists Janice Cayman, who plays in the Belgian EC team and is still in Lyon, the “really close” Australian national team defender Ellie Carpenter, and the English legend Jodie Taylor, who moved from Lyon to the United States a year ago.

Among the players from the teams playing in the Finnish group, Talaslahti also knows Denmark’s Signe Bruun and Germany’s Sydney Lohmann very well. Together with Lohmann, Talaslahti played in Bayern Munich’s U17 team and second team. Nowadays, Lohmann is of the star players of Bayern’s first team.

In FC Fleury 91, the media interest is still smaller than in Lyon and the organization is also significantly narrower than in Lyon. However, according to Talaslahti, the conditions for training and playing are equally good. Fleury is putting resources into the women’s team, as the club’s men’s team plays in France’s fourth tier, while Lyon’s men’s team regularly fights for the top positions in Ligue 1.

Fleury 91 has among others three Polish and two Cameroonian national team players. Talaslahti also thinks that coach Fabrice Abriel is the right person to coach Fleury 91.

In Talaslahti’s opinion, training is at the similar level in Fleury as in Lyon, and the debut season at the club was easy because the French league and its high professional level was already familiar. The official goal of the 2021-2022 season to reach the top five was exceeded as they finished fourth in the league. Next season Fleury will start chasing a place in the top three in the league.

Talaslahti lives near the club’s headquarters, in Fleury-Mérogis, about 35 kilometers from the center of Paris. She is satisfied with her last season. The only thing she missed was 6-7 games due to injuries. Talaslahti thinks it was partly due to the fact that she switched to playing on artificial grass after a long time.

A certain climax of the season was to play two matches against former club Lyon. It is hard to get a tougher measure that that at club team level as Lyon is on the absolute top in the women’s football.

“One day I will still play in the Champions League”

Talaslahti extended her contract by one year with FC Fleury 91 after a good autumn season. Therefore, at least next season she will continue with the Fleury. She considers the French league (D1 Arkema) one of the best leagues in Europe, so that’s why Talaslahti is in no rush to play somewhere else.

In the future Talaslahti’s aims to establish a starting spot in the Finnish national team. With FC Fleury 91, she wants to finish the next season as high as possible, in addition she has also ambitious goals to go even further.

There is no main preference when it comes to the club or country where I would want to play the future of Talaslahti.

The tall, 181-centimeter Talaslahti, sees playing with her feet and opening the game as her strengths, and has always been grateful for the support of her family. The family members are her “biggest fans” and naturally they are also going to England to watch the European Championships.

Katriina’s older sisters Pauliina and Johanna have also played soccer. Pauliina joined Nuremberg at the same time with Katriina, played in FC Bayern and from there Pauliina moved to play for a university in NCAA D1 league in the US. The games continued until last year, but then she stopped after injuries and graduating from the university. The eldest sister Johanna Tiinus, on the other hand, played in FC Honka when she was young, and has worked for a long time in coaching field for example in clubs like HJK and FC Honka. As of today, Tiinus is the executive director of GrIFK in Finland.