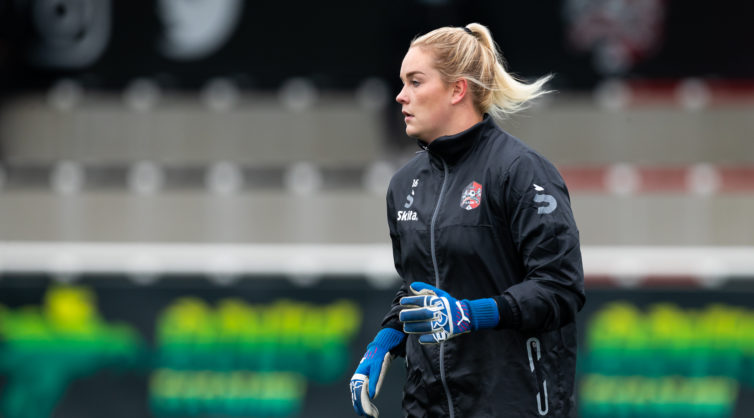 “You often hear to say that football is men’s sport, but that’s no longer the case today” – The youngest player of the Finnish women’s national team has seen women’s football take a huge leap from the parade ground.

Katriina Talaslahti, the 21-year-old goalkeeper of the French FC Fleury 91, is the only player born in the 2000s in the Finnish women’s national team squad traveling to the UEFA Euro tournament this month, July 2022. Talaslahti, who last played for a Finnish club team at the age of 13, made her debut in the A National team of Finland in April, when she played at Finland’s goal in the World Cup qualifying match against Georgia.

Finland won the game 6-0, and Talaslahti had only one save during the one-sided match. Actually, she didn’t get to show much of her skills in the game, but the goalkeeper believes that her performance during the entire national team camp in April was enough to convince coach Anna Signeul that she belonged in the team.

– I feel that I was really confident in the camp during which I made my debut. I gave my everything, I was myself and I showed what I can do, and so I got the feeling that I have a chance to make it to the European Championships team. I thought that the coach would choose who she wants, however, I decided to keep playing the way that I also play in my club team, Talaslahti told SuomiFutis.com on the phone.

Previously, Talaslahti had participated in only one camp of the A national team in Spain in the summer of 2021. At that time, I hadn’t played any matches with them yet. Katriina had to miss one camp last season due to a finger injury, but the performances she gave in April were enough to receive the invitation for the European Championships team squad. The pressure to show her skills was not visible during her debut with the team.

– I had a really great feeling after the Georgia game. The game itself wasn’t that difficult for Finland, since we were clearly the stronger team.

– The coach and the girls asked if I was nervous, and I answered no, because it was exactly the same as what I have been doing in my club team. I had played many games at a very high level for Fleury then, and thus during the debut I didn’t feel nervous. It was great to debut in front of our home crowd in Helsinki.

Always the youngest in her team

Being the youngest of the team is also very familiar to Talaslahti, also known by the nickname “Katti”.

– I actually only realized it a couple of days ago, when I was thinking: – How old are the other players actually in the squad? There’s one player born in 1999, 1998, and in 1997 but it’s still nice to be the youngest there and bring forward different topics from our perspectives, and show that we can do well among the more experienced players.

– Throughout my entire life, I have been the youngest player in the different teams I have been part of. Maybe it has increased my mental strength, so in every practice I really have to give my best.

– Young players can still develop a lot. I’ve heard from my old team mates that they are just trying to maintain the level on which they’re at now before they quit, Talaslahti says, referring to her time in Bayern Munich and Lyon.

For Finland, the Women’s World Cup qualifiers culminate in the games against Ireland and Sweden in September, just over a month after the end of the European Championships. The Finnish EURO team is very experienced, however, Talaslahti appreciates the fact that at least some younger ones were invited to the squad.

– At some point, however, there will be a change when the older players quit and the younger generations have to be brought along. It’s nice to see that a couple of younger players have already been included in the EURO team.

There were no difficulties in joining the Finnish national team, and the reception was good from the start.

– I didn’t feel like I was new in the team, and from the beginning it felt like I had been part of the team for a long time. It was really easy to get to know the girls, Talaslahti praised.

Ready for taking responsibility in the goal

Finland’s UEFA EURO camp started on Monday, on June 20. The team will play their last preliminary group game on July 16, so they will be together at least almost a month, and even longer if the team makes it to the next round after the group stage.

– I feel like the camp and the games themselves will definitely remain as a great experience and memory. This is the first time we have been together for such a long time.

– Anything can happen in the tournament, but we will go there to give our best with winning as our main priority. We’ll see after three games if we move to the next stage or not, but I have a strong feeling that we’ll be there giving our hundred percent effort.

The first goalkeeper of the Finnish national team has been Tinja-Riikka Korpela for years now while also serving as the captain of the team. Korpela and Talaslahti have known each other for years since Bayern Munich. Korpela played in FC Bayern’s first team in 2015-2017 as an already experienced player who had played in two European Championships. At the same time, Talaslahti played in the goal with the FC Bayern U17 team, while also training with the first team.

In Talaslahti’s opinion, the entire Finnish goalkeeper trio (ed. note. third goalkeeper Anna Tamminen) have very different playing styles. Although preliminary speculation suggests that Korpela is Finland’s number one goalkeeper, Talaslahti is immediately ready to help her team on the field if she gets a chance at the UEFA EUROS.

– Of course, I hope that I will get selected to play. After all, I played Finland’s last game (ed. note: April’s qualifying game against Georgia, interview done before June’s match against Japan), and in training I have shown my all. We have different playing styles, and who gets to play depends on the coach’s decision. Of course, I wish I will play, show what I can do, and help the team to win.

Korpela “Tinni” has also been a certain type of role model for Talaslahti, due to their time together at FC Bayern.

– I was 16-17 years old, and Tinni was already a very experienced goalkeeper back then. Of course, I saw and learned a lot from her, but when she transferred to a different club, I developed alone and was with other keeper coaches. In comparison, Germany and France have had quite different coaching. However, during our time together in Germany, we did a lot of things together and in the same style, as we were coached by the same coach.

For more and more women, football is a profession just like it is for men

Katriina Talaslahti has been able to see top-level women’s football up close. The giant organization Bayern Munich’s women’s team is ranked among the best in Germany year after year, and Lyon where Talaslahti spent the 2019-2021 seasons, has been dominating the Champions League and is considered being a pioneer in women’s football.

According to Talaslahti, the conditions and operating environment for the women’s team in both Bayern and Lyon are excellent – as you might expect.

– In Lyon and Bayern, women are given the same facilities as men. Yes, the good environment and the fact that women are also supported further develops the club and the players. As a result, women’s football is constantly improving, since women get better facilities, better coaches, physios and everything that happens outside of football matches.

Women’s football has developed at a good pace in recent years, when, for example, the biggest clubs in England, Spain and Italy have started to invest more in women’s teams. Barcelona has repeatedly attracted huge crowds to Camp Nou, while the improved media visibility of the Women’s Champions League is also driving the women’s game forward.

– Even women, they can become full-time professional football players. In some clubs you have to have another job besides football, but I feel like in the last couple of years more and more women are just playing football as their only job.

– Also, all the sponsors that have been on the men’s side have also been very interested in women’s football – at least based on what I have noticed in Bayern and Lyon. However, there is still a lot to do in many other clubs.

Talaslahti gives special thanks to the 73-year-old Jean Michel Aulas, the long-term president of Olympique Lyonnais.

– At least in France, development depends a lot on what the president of the club wants. In Lyon, the fact Aulas has famously developed women’s football every year and has a great influence on the women’s side. He makes sure to improve women’s football in every aspect in the club.

Nowadays, Talaslahti represents a smaller club, FC Fleury, where the facilities are not yet on the same level as in Bayern and Lyon.

– It was a bit bigger threshold for me. When I was young, I was used to the fact that everything is available in the same place, but the facilities at Fleury were not quite at the same high level. However, you have to be realistic, because that’s usually the situation with all women’s teams in clubs that don’t have a big men’s team in the first league.

Talaslahti believes that the continued growth in the popularity of women’s football will also be reflected in the European Championships, and expects the stands to be full as well.

– Probably one factor is that the games are held in England, and England has a really big fan culture. You can probably expect full stands at least for England’s games. Also, hopefully for us and other countries as well.

– It would be really great if a lot of Finnish fans and fans of Finland in general would came to the games. It cheers us up a lot when the Finnish people’s shouts and Finnish comments can be heard from the stands, Talaslahti sends his greetings.