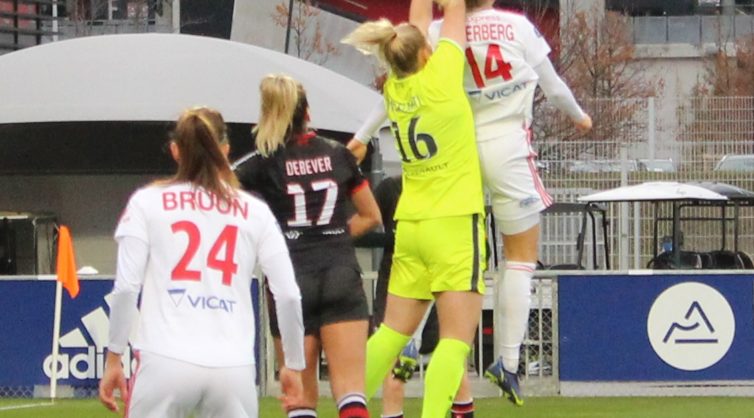 It had been six months since Katriina last set foot in Lyon’s Groupama OL Training Center. On a summer day she left Olympique Lyonnais after two trophy-filled seasons for a new challenge at Fleury 91.

Now it was time to return there with her new team – and with a reputation as one of French D1 Arkema’s hottest goalkeepers this autumn.

”It was of course nice to come back to Lyon. This was my home for two years. I’ve got a lot of great memories from here, a lot of friends and a lot of fans who came to say hello. This is a place that I’m going to remember forever. It’s always nice to return here and most importantly to play against a top quality side”, Katriina said after the match.

”The week leading up to the game felt pretty normal. Of course it’s a challenge to go through clips of Lyon’s matches, as they can plan to face us in so many different ways. I was feeling good about coming back here and of course showing them that I’m now playing, as I didn’t get a chance to play here. It was fun to play even though we lost.”

A great homecoming result it was not. Fleury are fighting for a Champions League spot, but Lyon, the 14- time French champions grabbed a 4–0 (3–0) victory in a typical OL fashion. Ada Hegerberg opened the scoring on the 24th minute with a neat finish that Katriina had seen hundreds of times on the nearby training pitch.

”It was a tough game for us. We could have scored a goal in the first half, and the game might have been different. Same in the second half. We could have scored, but it didn’t happen for some reason. It’s of course hard to play against Lyon. They are there at the top of the league. Maybe I could have played a bit better in some situations, but that’s how it went.”