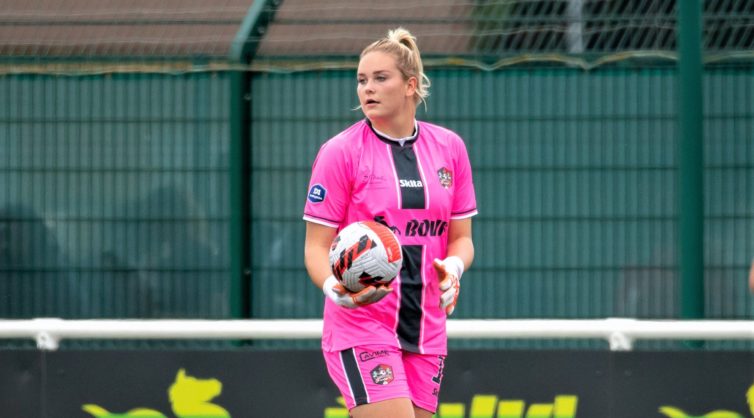 Not a lot really catches the eye with Katriina’s club FC Fleury 91. From the small suburban football stadium, the Auguste Gentelet Stadium, to the very basic team facilities and offices. But the story is a bit different if you scratch the surface.

”As a player there is nothing that would be radically different to for example Olympique Lyonnais. The training sessions are good, the number of training sessions is the same as in other clubs and our club president tries really hard to develop this club”, Katriina Talaslahti says.

And thus, the dream of playing in the Champions League is very real. Fleury are currently fourth in Division 1, four points behind Paris FC, but with a game in hand. With the top three teams reaching Champions League places, the race is on.

“The dream is the Champions League. For sure. We are a young team and a young club. We have a rivalry with Bordeaux, Montpellier, and Paris FC, three teams with professional men’s teams. That makes it different because we don’t have the same structures, stadiums or training pitches”, Fleury’s Sport Coordinator Mr. Sylvain Carric says.

But they have ambition.

Origins of FC Fleury 91 go back to a club established in Fleury-Mérogis in 1970. The same year as when PSG was founded in nearby Paris. The history of the women’s team goes back to 2003 and since 2017 the club has been in the French top division, nowadays called ‘D1 Arkema’. During those years Fleury have established themselves as a solid Division 1 club but are little by little aiming for something more than safety and midtable positions.

”It’s nice to play here, because our goal is always to win. You can see that in every person who works for Fleury. They all want to do their best”, Katriina adds.

Fleury are one of just few D1 clubs without a men’s professional team. Fleury’s men play in the fourth tier ‘N2’ of the French football pyramid.

By not being a big professional club, Fleury lose in the structures and the facilities, but gain a lot through an enthusiastic club president, Pascal Bovis. With a clear emphasis on women’s football, Fleury’s women are not in the mercy of changes of focus in a bigger club’s leadership, when investments can suddenly dry up.

“We can work with serenity”, Carric says.

With a club president determined to develop women’s football, there is a strong resemblance to the story of Olympique Lyonnais, where their club president Jean-Michel Aulas had a similar vision.

“Yes. I frequently say we have the little Jean-Michel Aulas, big president, big person. With Pascal it’s the same. I think it (Fleury) is a family club, but with a very big ambition, because we have the chance to get bigger”, Carric thinks.

Fleury established themselves as a Division 1 club with French players. Now their strategy is to be more cosmopolitan. To find quality players from the international market and to bring different mentalities and characteristics to the team.

“When we arrived in the First Division, it was not easy to call a player to come to Fleury. Fleury does not have a professional men’s team. The name is not Lyon or PSG. But after two seasons we started to look for foreign players.

Fleury looks for potential that can be developed.

“It’s very important to find young players with a big capacity to progress, like Katriina, like Marie, like Dominika Grabovska, a Polish player. I hope these players can sign for Lyon or PSG later. But prefers to stay in Fleury! But if they sign for a bigger club, our work has been done well.”

The strategy is bringing out desired rewards because Fleury nurtures an environment of development. They have a big and professional coaching staff, aim to take care of their players and are willing to provide their players to play in a high-quality club.

“They bring young players forward. We have good surroundings for young players and for those kinds of players who are not yet top, top players. They trust all the players that they have”, Katriina says.

On the pitch it is very clear what the team tries to be. And many of the new players have found Fleury to be a welcoming place for new faces. Like Imane Chebel, Fleury’s Canadian-born Algeria international.

“I think it is a good club that makes us new girls feel comfortable and welcome. We have a lot of new players, but you can’t even see it on the field, because every new player feels so comfortable in the team. It could have gone wrong with so many new players!”, Chebel says.

“As a team we always play for each other, and we give 100 percent every time. I think that has helped us win some games against teams that usually finish in the upper table, because we really play as a team.”

When trying to develop the club and attract interesting players to the club it also helps that Fleury-Mérogis is located right next to Paris, just south of the city, close to Paris-Orly Airport.

“It is very important. When I speak to a foreign player, they often think, Fleury, I don’t know where Fleury is. Only 10 000 people live here. But if you play in the French league and live 20 minutes from Paris…”, Carric says. Or if you even played in the Champions League!